The question so many investors ask us “Where is the next place to buy”. Here we research one such new market, still in Germany, the city of Bremen and in particular its harbour city of Bremerhaven – and its potential as a place to invest in the coming years. 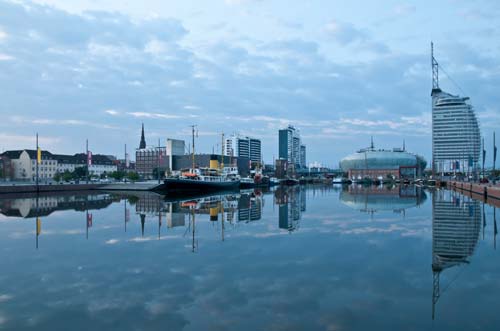 As investors ourselves we are continually being drawn back to Germany. The high-proportion of tenants has resulted in some great and stable monthly returns for our investors, and many have enjoyed very good capital growth of the last few years. Germany famously did not domestically participate in the credit binge of the last decade and property prices have remained very favourable for investors to buy into, backed by high levels of finance at historically low rates. Our work in Leipzig for example has resulted in the sales to around 50 investors, from small studios to large property property portfolios with all of our earlier investors in the market [say around 2007-08] now sitting on gains of around 20-40%. A very good result, compared to other developed markets in this period of general decline. And lets remember the average yield on purchase price for our investors has been between 10-11% during this period, producing a useful income whether the investments were made in cash or backed by finance during the period of hold. How will Bremerhaven compare?

Bremerhaven is Germany’s second biggest port, Hamburg being the biggest, and lies to the north west of the country around 100km east of the Dutch border. The city is located in the state of Bremen, being around 50km north of the city of Bremen, a train ride of around 30 minutes. Passengers by air would usually use the city airport of Bremen, served 2 times per day to London, daily to Edinburgh and numerous flight across Scandinavia, Spain and Italy. Bremerhaven therefore enjoys easy access for investors across Europe, with schedules often allowing for a day inspection trip, without the need for overnight stays, useful whilst researching the market and keeping on top of investments once made.

The City, History and Economy

The town of Bremerhaven was founded in 1827, although there were already settlements, such as Lehe, as early as the 12th century. Bremerhaven was formerly known as one the most important harbours of emigration in Europe to the New World. Located about 50 km north of Bremen along the river Weser, Bremerhaven’s ports and container terminals are deep enough to accommodate large sea-going vessels, a crucial pre-condition for a modern shipping sector. Politically, Bremen and Bremerhaven together form the German federal city-state of ‘Freie Hansestadt Bremen.’ As a key base of the German Navy, most of the city was destroyed in World War II. After being a post-war enclave of the United States within the British zone of northern Germany, the city became part of the Federal State of Bremen in 1947 and received its name Bremerhaven4. Today, Bremerhaven is therefore part of the city-state of Bremen, practically being a state of two cities, while also a city in its own right. This is complicated to the extent that the city of Bremen has owned the “overseas port” within Bremerhaven since 1927. In the 1970s the import and export of car, fruit and containers increased enormously. Due to the global shipbuilding crisis in the 1980s many shipyards and docks closes down. Nevertheless, there was a positive development in the fish processing industry which sustained its position till now.

The separate fishing port is now a major food industry centre and the continent’s largest production location for frozen foods. In addition of late, six wind industry hardware suppliers, as well as two wind industry R&D organizations, have already decided to establish and/or expand their operations in Bremerhaven.

The state of Bremen benefited from assistance from European structural funds in the 2007-2013 funding period. About 142 million Euros have been allocated from the European Regional Development Fund (ERDF) for the two cities of Bremen and Bremerhaven under the “Bremen ERDF Operational Programme 2007 – 2013”. The city has the goal of being one of the top 10 technology centres by 2020 in Germany, and funding has been targetted towards this goal.

Some examples of the planned projects for Bremerhaven:

– Support for the Institute for Marine Resources (imare) – pilot phase

– Promotion of the science themes period

Benefiting from huge investment from the European and national grants, the city and harbour area in particular have transformed themselves over recent years. The creation of a new museum, shopping complex and climate house tourist centre have brought an influx of visitors to the city.

Last year, the city’s hotels registered some 300,000 guests while 1.5 million day-visitors also came. It is scarcely possible to take in all the city’s tourism highlights in just a single day. You need more than three hours alone just to calmly enjoy the “Klimahaus Bremerhaven 8 Grad Ost” (climate house 8 degrees east).

Bremerhaven is a community of 114,177 inhabitants (2010). Since 1968 when Bremerhaven’s population of 148,931 inhabitants reached its peak, there has been a gradual decline in population. Declines in population have lately been a lot lower than earlier forecasts would suggest and the recent change in law to allow residents from across the EU accession countries to live and work freely across Germany may have a big effect on a city that already has a higher than average migrant population servicing the naval and fishing industry.

The table above makes this point, with Bremerhaven being cited as one of the cities in Germany with the biggest positive swing in population expectations between 2003 as compared to 2009. Based on the apparent population upswing in Bremerhaven, Deutsche Bank specifically includes the city as one of the “hidden jewels” where the yields are now higher than the strong economic and population statistics should be in terms of reward. Looking at recent prices histories for recorded sales, Bremerhaven has topped the table since 2009 in terms of capital increases, coming off a very low level. The table below is taken from the Immowelt.de portal.

Since its constitution, Bremerhaven’s economy has always been linked to its port activities. The city’s port is the sixteenth-largest container port in the world and the fourth-largest in Europe with 5.5 million twenty-foot equivalent units (TEU) of cargo handled in 2008. However, trade and exports depend heavily on external factors, most notably on the global economy. With the economic downturn, the port authority recorded a 20 % decrease (to 4.4 million TEU) in container handling in 2009 compared to the previous year. Car exports in particular fell sharply by 40.8 % comparable to the level of 2006. Due to the German government’s economic stimulus package and the slowly recovering global economy, experts predict a significant positive turnaround for the port 2010. 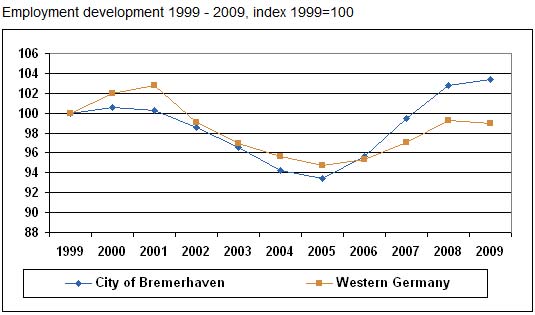 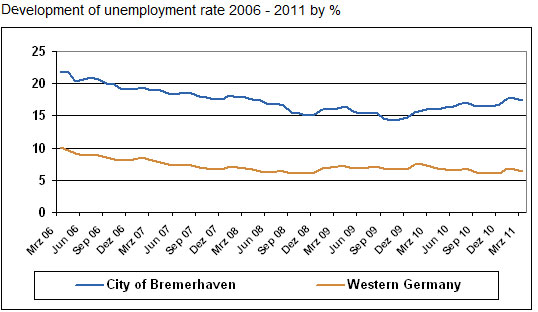 In the last 2 years, the improving economic situation in the Bremerhaven economy has translated to the beginnings of a recovery in the property sector. From the table below, complied for Deutsche Bank, Bremerhaven lists at or near the top for value growth in the various sectors of housing in the market. 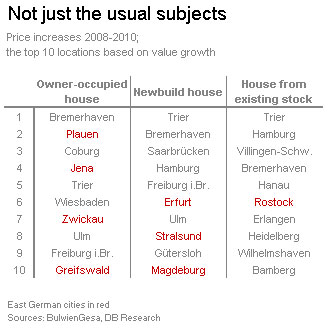 Whilst still at comparative very low levels to the rest of Germany, the increase in prices together with the improving economic backdrop provide a good reason to look to the market in more detail.

Areas of the City

Rentals are fairly flat across the city, with rents in the range 3,5 Eur to 5 Eur per sqm being typical. Social housing represents a large sector of the tenant market.

The biggest residential districts of the city are Lehe, Geestemünde and Wulsdorf.

The district of Lehe is located north of the centre of Bremerhaven, however still central enough that the city is within easy reach with a short walk or bus ride on the city’s extensive bus network. Lehe has two distinct halves – you can still see and feel the charm of a working district with more modern and contemporary architecture in the top half of the quarter, in the lower half has quiet tree lined side streets with predominately renovated buildings from the turn of the 19th century. The average rent in this part of the district is about 0.50 Eur/sqm higher than the upper end of the quarter. This is the largest district for yield multi-family houses typical of our product at ProVenture.

Lehe is mainly made up of period stock, from around 1900, and is attractive in look and feel. Most properties of this era are 3-4 levels high with between 3-8 apartments in each. Balconies are favoured by tenants, and found in around 35% of the stock in this area. Property prices are still very favourable in this location, both for apartment houses and single apartments, with around 400-500 Eur per sqm often being needed which makes the market one of the cheapest in Germany, and the cheapest in the old West.

Constructed in 1907 and refurbished over several iterations in the last 20 years, this 9 unit investment currently achieves a net cold rent of €25.308 pa – a 10%+ yield…

Constructed in 1910 and refurbished in 2010, this 5 unit multi family house in the popular district of Lehe offers a yield of around 10% on purchase price. Currently achieving…

Solid Investment in Excellent Condition Constructed in 1913 and renovated in 2014, this property currently achieved a rental income of €98,388pa. The residential units are in excellent condition and combined…

The district Geestemünde is located in the district south of Bremerhaven at the mouth of the Weser Geeste. This very central location is an great advantage to the district, with Bremerhaven’s pedestrian shopping zone a 15-20 min walk, and 5 mins by car. Geestemünde has approximately 33,000 inhabitants of the largest populated area of Bremerhaven. The landmark of the district is the water tower built in 1891 at the Konrad-Adenauer-Platz, which twice weekly hosts a large farmer’s market, adding to the overall community atmosphere. Due to its proximity to the port area, this district suffered badly during World War II, and as a result, ,much of the housing stock is post 1950’s build or re-built period buildings. In Geestemünde there is a good and large selection of retail shops, with kindergartens and four primary schools making this district popular with families. Rents are in the range of 4.1-5.5 Eur/sqm – with new rents starting towards the top of the bracket. The Central Station is located in Geestemünde and there are frequent connections to Hamburg and Bremen, where many of the inhabitants of this district work.

In the south of the city lies the district Wulsdorf, here the district has preserved its original rural character and now looks a bit like a small town. The growing infrastructure offers all the convenience goods within the district, removing the need to make the short trip into Bremerhaven centre. In the old ‘village’ of Wulsdorf is the oldest building in the district, the St. Dionysius Church from the 12th Century. The appearance in the old town is the old and typical village characterized by buildings, thatched cottages and craft stores. This social feel is of great importance to the residents, who feel like they are from Wulsdorf rather than Bremerhaven. Tenants living in this area tend to remain in situ for lengthy periods than in other areas of the city, and like in Geestemünde, ther is a train station with a fast connection to Bremen, where many of the inhabitants work. Seen as more of a high-class district, purchase prices here are higher than other areas of the city, impacting on the overall yield picture.